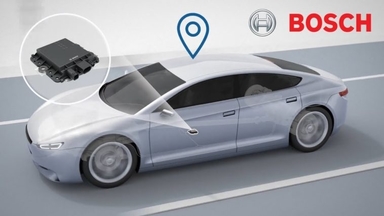 An important prerequisite for this is precise vehicle localization. A vehicle must always know where it is so it must be able to work out its position safely accurately and reliably.

A highly accurate map serves as the basis for localization, Boss uses the following technologies to enable the vehicle to determine its position on this map:

The combination of these technologies ensures maximum precision safety and availability.

Boss utilizes the surround sensors integrated into the vehicle to create an independent map layer that depicts the unique features of the road called the road signature.

During the trip radar and camera systems in connected vehicles record detailed information about stationary features such as lane markings and guardrails.

This data is then consolidated in the Bosch IoT-cloud where it is constantly updated.

The road signature forms an independent layer on the high-definition map.

A comparison of the current sensor information provided by a vehicle with the features saved on the map enables precise and reliable vehicle localization thanks to radar sensors, this is also possible when visibility and weather conditions are poor.

To satisfy the stringent safety requirements of highly automated driving advanced satellite-based localization is used alongside surround sensors and the road signature.

The satellite receivers determine the vehicles current position based on the travel time of the signal from several satellites.

This measurement of time is however affected by imprecision in the satellite orbit, satellite clock errors, and atmospheric disturbances.

To offset these effects the vehicle motion and position sensor uses the signals supplied by a correction surface.

The correction data is generated using a network of reference stations whose precise location has been measured.

The vehicle motion and position sensor processes this data to determine the actual position of the vehicle and provides maximum reliability and precision.

If a situation arises in which not enough information about the surroundings is available or the satellite connection is disrupted or lost completely then the integrated inertial sensors become active.

The inertial sensors wheel speed sensors and steering angle sensors are used to calculate the relative change in position of the vehicle ensuring that localization is still possible.

Localization by Bosch accurate safe and reliable thanks to a combination of various technologies.